An Historic Week for Ireland at the Tour de France

After Monday’s rest day, the stage was set for a unique TDF parcours. For the first time in the race’s history , the route of stage 10 was to feature 2 islands.  Oléron and Ré are two natural islands, off the Atlantic coast of France, linked to the mainland by bridges.

The profile was largely flat, reaching just 16 m above sea level. Weather was the biggest potential spanner in the works of a day that was otherwise sure to end in a bunch sprint, with strong coastal winds a constant threat on the exposed island roads.

While the wind didn’t blow the race apart (as it had previously on Stage 7), early in the race some riders, including Dan Martin (Israel Start-Up Nation) and Thibaut Pinot (Groupama-FDJ) suffered as a result of the adverse conditions. As a result many riders seemed reluctant to press on, and the peloton remained largely together.

To add to the tensions of the day, several riders, including Ireland’s own Nicolas Roche (Sunweb) and Toms Skujiņš (Trek-Segafredo), were also involved in crashes early in the day.

At the intermediate sprint it seemed to be Peter Sagan (who had retaken the Green Jersey from Bennett on Stage 7) who seemed like the stronger rider on the day, marginally extending his lead over the Irish rider, as he committed to an attack and came in 2nd behind Matteo Trentin (CCC). 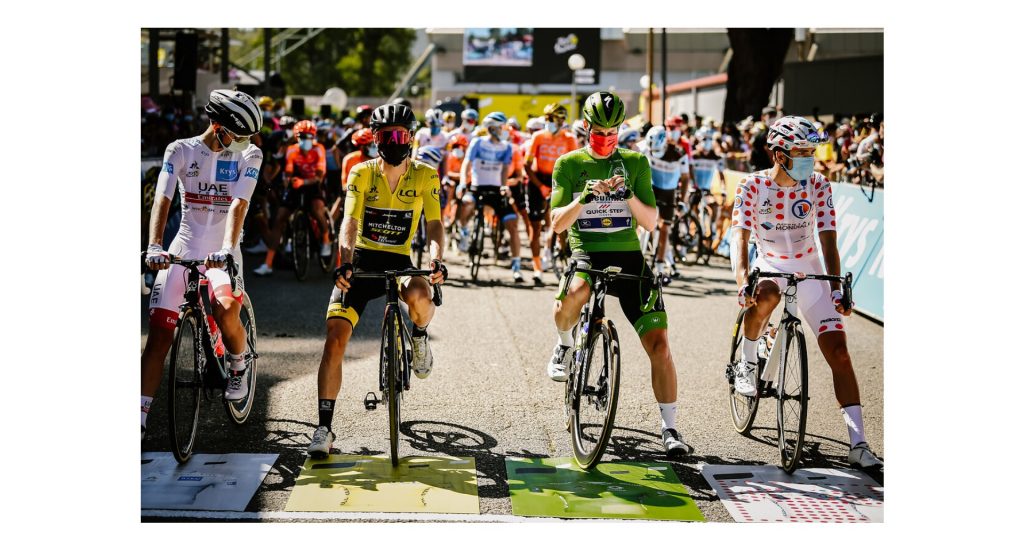 Bennet however, had his eyes on the biggest prize of the day. In the closing moments of the stage Michael Mørkøv, Bennett’s final lead out man, took advantage of Team Sunweb’s train (as Cees Bol had already lost his position), bringing Bennett into the lead, with less than 200 m remaining. Caleb Ewan, who had pipped Bennett to the post on stage 3, only had enough time to draw close to Bennett, but not past him. Main rival Sagan came towards the line with a burst of speed, but seemingly had left it a little late, finishing in a close third, while Elia Viviani (Cofidis) had his best finish so far in fourth.

His historic victory not only handed Bennett his first Tour de France stage win, but also put the Green Jersey back on his shoulders. Some 21 points clear at the top of the sprint leader board, Bennett was somewhat emotional at the close of his first stage win.

“I don’t think it’s hit me. You dream of it and you never think it’ll happen,” Bennett said of his victory.

Bennett won 3 stages at the Giro d’Italia in 2018, followed by victories on 2 stages of the Vuelta a España in 2019. He is now the first Irish racer to claim stages in all 3 Grand Tours for almost 60 years (since 1963). His win was also Ireland’s first at the Tour de France itself since Dan Martin’s 2018 Stage 6 victory.

Stage 11 was another for the sprinters. The stage from Chatelaillon-Plage-Poitiers seemed the perfect pace to inspire Bennett yet again. It was Irish great Sean Kelly who was the last man to take victory in Poitiers, when he beat out Dutchman Gerrie Knetemann in a two-man sprint, in 1978.

The main bunch kept any breakaways on a short leash, with the Intermediate Sprint very much in mind, and only Matthieu Ladagnous (Groupama-FDJ) was able to stay away. Bennett was the first of the main bunch through Les Grands Ajoncs, extending his Green Jersey lead over Peter Sagan by a further 4 points.

As predicted, the finish in Poitiers came down to a bunch sprint, despite a last ditch attack by Lukas Postlberger (BORA – hansgrohe), which was shut down by Bennett’s Deceuninck – Quick Step teammates. It was Caleb Ewan who would yet again come out on top, following Bennett’s wheel as he attacked. He snuck past to take victory in a 4-way photo-finish. Despite being beaten to second place by Sagan, Bennett’s 3rd place was enough for him to retain a narrow overall lead.

That wasn’t the end of the story, however, with 4th placed Wout Van Aert (Team Jumbo-Visma) visibly angry with Peter Sagan’s actions in the closing metres. The race jury shared his opinion that Sagan’s sprint had been dangerous, and relegated him to the back of the bunch. In addition to losing his points won on the finish line, he was docked a further 13 points, meaning Bennett would end the day with a 68-point lead. 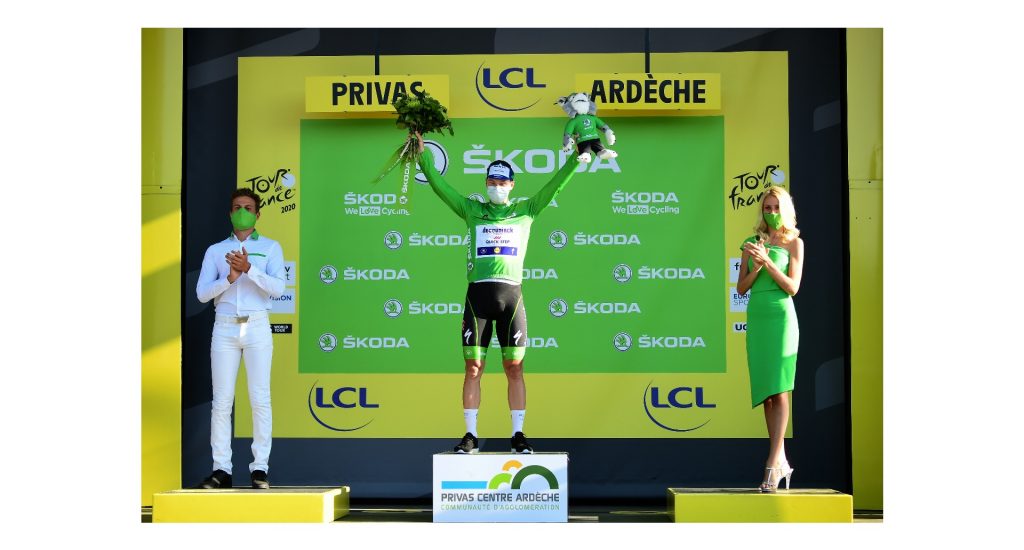 As the Tour heads East towards the Alps, the Green Jersey is surely Bennett’s to lose. With the only real remaining sprint stages coming in the final 3 days, the main challenge isn’t likely to come from another sprinter, but from the risk of finishing behind the dreaded Broom Wagon. As the focus turns towards the main GC contenders, we’ll keep watching until the very end of each stage to cheer the Green Jersey safely across the line!