Bennett Beats the Bunch in Paris!

Sam Bennett was in a strong position heading into the final stage of the 2020 Tour de France on Sunday. The 29 year old Deceuninck–Quick-Step rider already had a commanding lead in the points classification, heading into the final weekend of the race. He reclaimed the green jersey, from former teammate Peter Sagan, at the end of stage 10. After battling over the Alps in the final week of the tour, the stage was set for the final showdown in Paris.

As the riders charged down the Champs-Élysées for the final time, the blue ribbon stage victory was wide open. Many of the biggest names were poised for the sprint, including 7 time green jersey winner Sagan, and, last years victor in Paris Caleb Ewan. It was however Bennett, who timed his attack to perfection, and capped off his epic Tour de France by claiming the final stage.

Bennett said of the day;

“I can’t tell you how excited I am … the green jersey, on the Champs Élysées. I never thought I’d ever be able to win this stage; the sprinters’ world championships, and to do it in green, it’s just so amazing.” 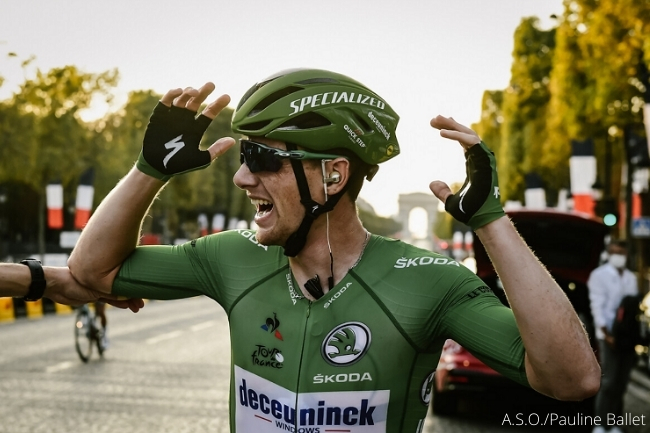 At a Tour where he has already made history; this victory cemented Bennett’s place as a legend of Irish cycling. He out sprinted current world road race champion, Mads Pedersen, while the Giant of the green jersey Sagan, finished the stage in third.

Bennett becomes the first rider, since Mark Cavendish in 2011, to win on the Champs-Élysées while wearing the green jersey. He is also only the second rider who isn’t Peter Sagan (the other being Michael Matthews in 2017) to win the jersey since then. Interestingly, Matthews’ green jersey victory came following Sagan’s disqualification from the 2017 tour. Therefore, Bennett is also the first man, other than Sagan himself, to win green when the Slovakian rider has completed the Tour.

Bennett spent much of his childhood in Carrick-On-Suir, home town of fellow Irish Cycling great Sean Kelly. Kelly was the last Irish rider to win green, back in 1989. He said of the weekend’s events,

“It’s unbelievable – just so great for cycling in Ireland”.

“I think it’s going to be really important for Irish cycling, because now, with the exposure we’re getting at home, the younger generation … will get more into cycling, and that’s what we need.” 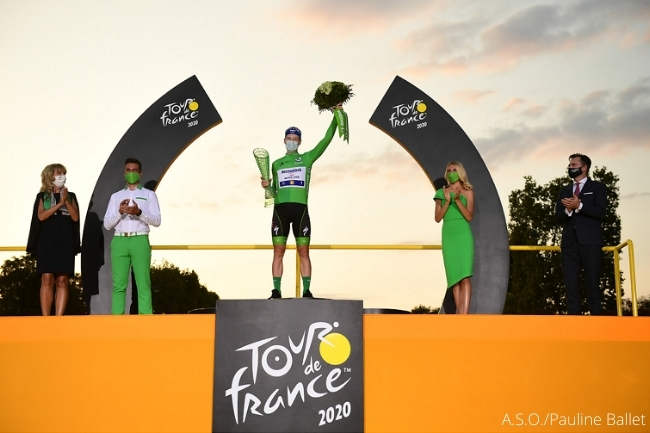 In a year where he has broken so many records and defied so many expectations already, Bennett has now become the first Irishman to win the prestigious Paris final stage of the Tour de France.

So often second choice to Peter Sagan, during his time at Bora–Hansgrohe, Bennett made the decision to move to Deceuninck–Quick-Step ahead of the 2020 season. Despite the challenges that this year has brought, the risk has certainly paid off. Bennett said of the efforts of his new team;

“To do it [win] with my dream team, Deceuninck-QuickStep – the way the boys rode all day was fantastic. It’s just so amazing, the feeling, I can’t thank everyone enough.”

At home in Ireland, Bennett had the support of the nation. Leading the cheers was his biggest fan 89 year old grandfather Pat, who would’ve been there in person were it not for COVID -19. While elsewhere former track World Champion, and seven-time Irish road cycling champion, Martyn Irvine, described Bennett’s victory as,

“One of the best green jersey races I’ve seen since I’ve been involved in cycling.”

He believes that Bennett’s iconic and historic green jersey win, rounded off by taking the title on the Champs-Élysées, will bring about a new era in Irish cycling. This is a uniquely exciting time for Irish cycling. Bennett has now surely proved himself to be one of the greatest sprinters of the modern era. We can’t wait to see where the future will lead for Bennett, and for Irish cycling. Hopefully YOU can join us, for the bright future of Irish cycling! 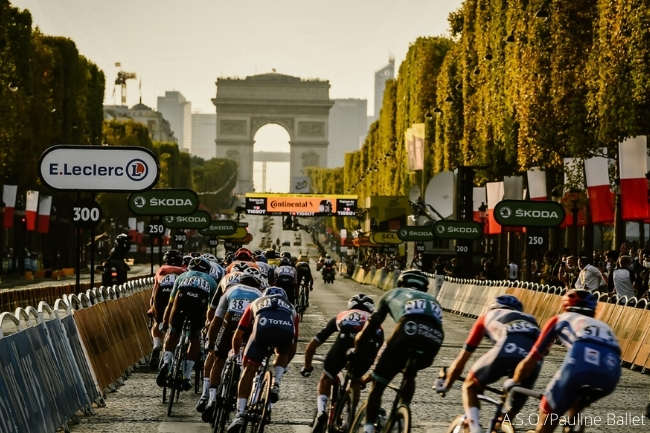