Tucked away on the ruggedly beautiful, North West coast of Lanzarote, Club La Santa is the sporting paradise you might never have considered. But the truth is, it’s heaven for any fan of an active lifestyle.

My name is Meg. Back in the June of 2019, before I had even heard of Sports Travel International (where I now work as Content Editor), I was a keen runner, novice rider, and lapsed swimmer. Naturally, I was therefore looking to get into the mad world of triathlon. It was then that I embarked on my first ever journey to the much mythologised Club La Santa.

A Playground for the Pros

Club La Santa is the worst kept secret in triathlon. From IRONMAN World Champion, Anne Haug to British golden girl of all things tri, Lucy Charles – Barclay, the resort is a playground to the pros. Week after week you can scroll through Instagram, drooling over photos of your favourite athletes training at world class facilities, in the Lanzarote sun.

I had never thought that CLS (Club La Santa) would be the place for me though. I have always been into sport (almost) all sports, but I’m far from professional. Would I stand out as distinctly amateur? Would everyone else there be 6”2, perfectly toned, Amazonian figures? Will I be totally broken by the time I’m halfway through the week? There was only one way to find out…

The first thing we did after checking in and dropping our bags in the room was hit the pool. As someone who spent five years working as a lifeguard, as I made my way through higher education, sun lounger by the pool type holidays have never really been my thing. A bit of a bus-man’s holiday. But, an eight lane, 50 metre pool? Now that is something I can get on board with. We opted for the North Pool, as we had been advised that this was usually quieter than the twin South Pools, and that you can get great views round the pool. It was incredible. And a really refreshing start to the holiday after a four-hour flight from Manchester, with a small child kicking the back of my chair the whole way.

I had travelled to La Santa with my partner Rhianna, who is a much more accomplished athlete than I. She was, at the time, training for her second 70.3 World Championship. The triathlon facilities did not disappoint. There’s the pools (yes, that’s pools plural. Club La Santa is home to no less than three  50 metre swimming pools and a family leisure pool), and the lagoon, to take care of all of your swimming needs. There’s the Bike Centre, where you can hire almost every kind of bike imaginable. There is even a team of bike mechanics on hand to take care of any mechanical queries. And for runners, the freshly laid track, and a plethora of stunning trail runs right on your doorstep.

Views for days! Hire a bike for a day and discover the island

I had recently taken up triathlon when we went to La Santa. I had only done one, Sprint Distance race, and was nervous about a bust season ahead. So, a massive highlight of the holiday for me was getting the chance to practice racing in the in-house triathlon, aquathon and duathlon races. Again, these in house races cater for all different experience and ability levels, from beginner friendly, sprint triathlons to a half marathon race, complete with water stops and electronic chip timing. It was a great way to build up my confidence ahead of my first racing season! (And the free sangria at the prize giving went down pretty well too!) 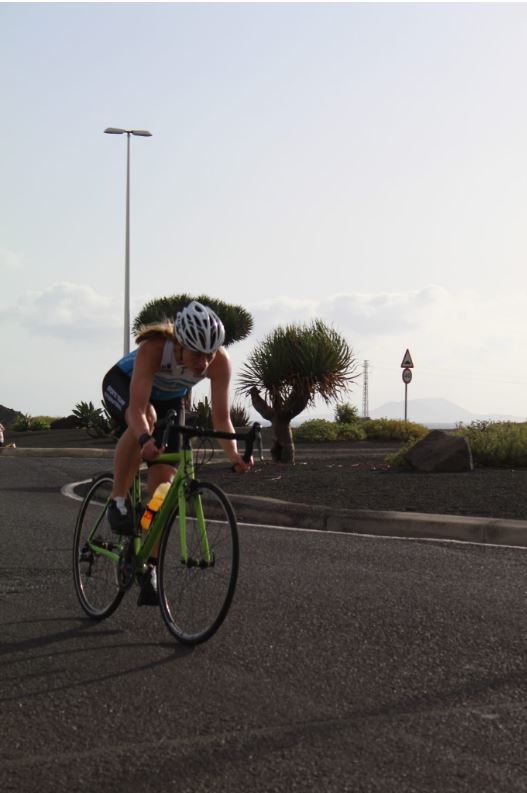 What surprised me most, however, was that I really wasn’t out of my depth! This elite playground for the world’s top athletes was, exactly that. But, at the same time, entirely inclusive! There were beginner sessions, and athletes of all shapes, sizes, experience, and ability levels. CLS felt, to me at least, like a real celebration of sport. People coming together, regardless of their differences, and sharing in what they did have in common: a love of sports and active lifestyles.

Over 80 Sports to Try

The other big surprise was that Club La Santa really isn’t just for triathletes. I had heard all about the 80 different sports and 500 different activities, but you can’t really comprehend how much that actually is until you see it.

Fortunately, the Sports Booking App makes planning your week’s activities simple. It gives you a place where you can clearly see everything that’s on offer each day. You have a points allocation to ‘spend’ on the activities you want book. The biggest problem is fitting it all in.

Oner all in my 1 week stay at Club La Santa I took part in:

And we barely scratched the surface….

At some sports (like swimming and kettle bells) I was an old hand, and I was able to enjoy a sport I already know and love in an amazing setting. For other sports, such as windsurfing and aerials, Club La Santa was my first time trying them, and to be honest  I was a little nervous about being ‘left behind’.

It soon became clear however, that my fears were unfounded.

Despite being potentially the worst windsurfer ever to have set foot on the planet, which came as no surprise to me as I have a condition called Dyspraxia, which effects balance and hand – eye – co-ordination, among other things, I had a whale of a time. The instructor was really friendly and welcoming, and definitely didn’t take things too seriously, which really made me feel at ease. We had a good laugh. And I think the congenial atmosphere was actually really helpful too. I left the class maybe not quite the worst windsurfer in the world, and that was a win for me!

The other unplanned love I came away from Club La Santa with was Yoga. I’ve never considered myself a ‘yoga person’. I don’t really like sitting still for more than about 15 minutes, and to be honest, after years of running, riding, and weightlifting, there are ironing boards more flexible than I am. But, on the second day of our trip we found we had some free time in between a morning swim and our next session, so decided to give the lunchtime yoga session a whirl.

The session was held at the Volcano (a sort of triangular Astro turfed arena where outdoor classes are held, with stunning views, you guessed it of a volcano), which is a bit of a suntrap around lunchtime – perfect for yoga. We quickly settled into a routine of attending the yoga daily, followed by a trip down to El Lago restaurant, by the lagoon, for granola and orange juice. Probably thanks to the freshness, and the Lanzarote climate, I still maintain this is the best orange juice I’ve ever had.

And so began an obsession. By the end of the week, I was attending more than one yoga session a day and trying different styles and venues for yoga (paddle board yoga was such a unique challenge, because of the balance and stability involved in being on a floating board). This new routine felt good for me. Restorative. Regular yoga and homemade smoothies and fruit juice is something I have tried to bring home with me. I even invested in a juicer and blender. Can’t say I can compete with the Club La Santa orange juice though!

A Place to Relax

CLS isn’t all about rigorous training and thoroughly planned out days though. There are  kid’s clubs, so the parents can chill out. And, talking of chilling out, the newly refurbished Wellness Centre is the perfect place to indulge in a little R&R. My personal favourite restaurant has to be El Lago, overlooking the lagoon. The food is fabulous, the atmosphere is relaxed, and to top it all off, each night you get treated to the most spectacular sunset.

Now for the important detail. The legendary Green Team Show. Whether or not holiday entertainment is your thing, this is a must! It’s an institution! The kids love it, the regulars worship it, and the newcomers, as I was, will sit in a corner, feeling pleasantly baffled, but sure to return.

The real magic of La Santa is discovering new things about yourself. Being in a fully inclusive and super supportive environment, where you can try things you never thought possible or push your limits in this Canarian paradise.

It was at CLS I discovered my love for yoga. It was there that I pushed myself an tried a whole bunch of new sports, including things I knew were well beyond my skill set. And, that very same week, I set off on a 25 km coffee ride, and was having so much fun I ended up completing my first cycle century, on a madcap unplanned tour of the island.

When a Coffee Ride gets out of hand

The Active Lifestyles Holiday for Everyone

Whoever you are, whatever your sport, and wherever in your journey you’re up to, Club La Santa really is the active lifestyles holiday for everyone. Although I’ve only spent a week there it felt like so much longer. As soon as you get involved you feel like you’re becoming part of the mythical Club La Santa family. It wasn’t elitist, and I never felt out of place. Ok, yes, so I was absolutely exhausted before the end of the week. But I loved absolutely every second and regret nothing! Besides, there were plenty of moments to relax, recover, and enjoy the Club La Santa magic. This is not an account of a week in the life of Club La Santa, this is about packing a life into a week in the Lanzarote sun!

Now that travel is finally back, all I have left to say is … Where did I put my passport!