Sports Travel International - Our Top Picks – For a Trip to Rome!

Our Top Picks – For a Trip to Rome!

“All Roads Lead to Rome”, so the saying goes. Hosting some 9 million visitors a year, the centre of the ancient world is a bucket list destination for lovers of history, art, culture, and of course incredible food! While the ACEA Run Rome the Marathon is, in our mind, the best way to see the sights of the Eternal City; some of you might also want to take some time to discover “Caput Mundi” at a more leisurely pace. We’ve put together our top picks for a weekend in Rome that you will remember for an eternity! 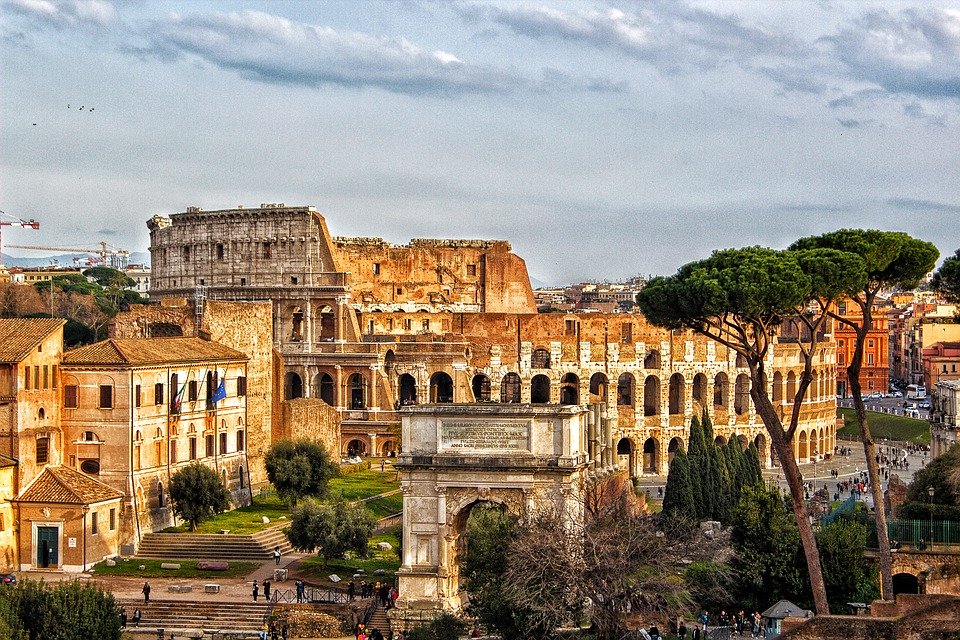 The Flavian Amphitheatre, more commonly known as the Colosseum is probably the most iconic example of historical architecture in the whole of Italy (if not the world). Despite appearing almost completely round, the Colosseum is an oval shaped amphitheatre, constructed out of travertine limestone, tuff (volcanic rock), and brick-faced concrete. The largest surviving structure of ancient Rome, it was, in its time, the greatest amphitheatre ever built. The arena could hold between 50,000 and 80,000 spectators, at various points during its lifetime, with an average audience of 65,000.

It was most notably used for gladiator contests and public spectacles. But, was also the host of animal hunts, executions, battle reenactments, and dramas based on Roman mythology. The Colosseum ceased to function as an entertainment venue in the early medieval era. Subsequently, the structure fell into disrepair. It suffered damage by fire, earthquakes, and neglect. It was ransacked by stone robbers, and even at one time, was used as a fortress by the Frangipani Family.

The Colosseum was later restored, and today stands as one of Rome’s most popular tourist attractions. At the side of the Colosseum stands the the Arch of Constantine; a triumphal arch honoring the Emperor Constantine as “liberator of the city and bringer of peace”. It was constructed to commemorate his victory in the battle of the Milvian Bridge in 312. The largest and best preserved Roman triumphal arch, it is well worth a visit while you are at the Colosseum. 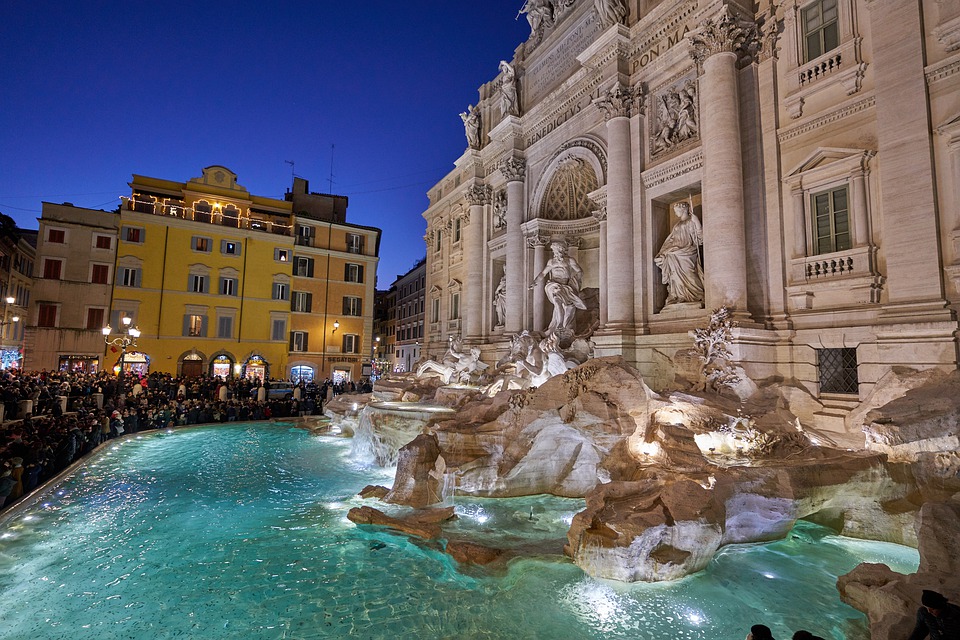 Ok, so we’re cheating, but it’s hard to just pick one! From the world famous Trevi Fountain to the Triton Fountain, and who could forget the grand threatre of water that is the Piazza Navona? The city of Rome is home to fifty monumental fountains, and features more than 2000 fountains in total. That’s more than any other city on Earth! For over two thousand years the fountains have been a vital part of Roman life. Not just a form of decoration, they also provided the city with drinking water.

The fountain at the  junction of three roads (tre vie), was , designed by Italian architect Nicola Salvi, and completed by several sculptors and architects, including Giuseppe Pannini. Standing some 26.3 metres (86 ft) high and 49.15 metres (161.3 ft) wide,the Trevi Fountain is the largest Baroque fountain in Rome and among the most famous and recognizable fountains in the world.

In 2013, Italian fashion house Fendi sponsored the largest restoration project in the fountain’s history. It took 20 months and cost well over 2 million euro. All cracks and damage to the fountain were restored by skilled artisans, and the stonework was thoroughly cleaned to remove any discolouration, caused by the pollution in the modern city. The fountain was completed with the installation of 100 bright LED lights, which illuminate the structure at night, vastly improving the spectacle of the fountain in the evening. 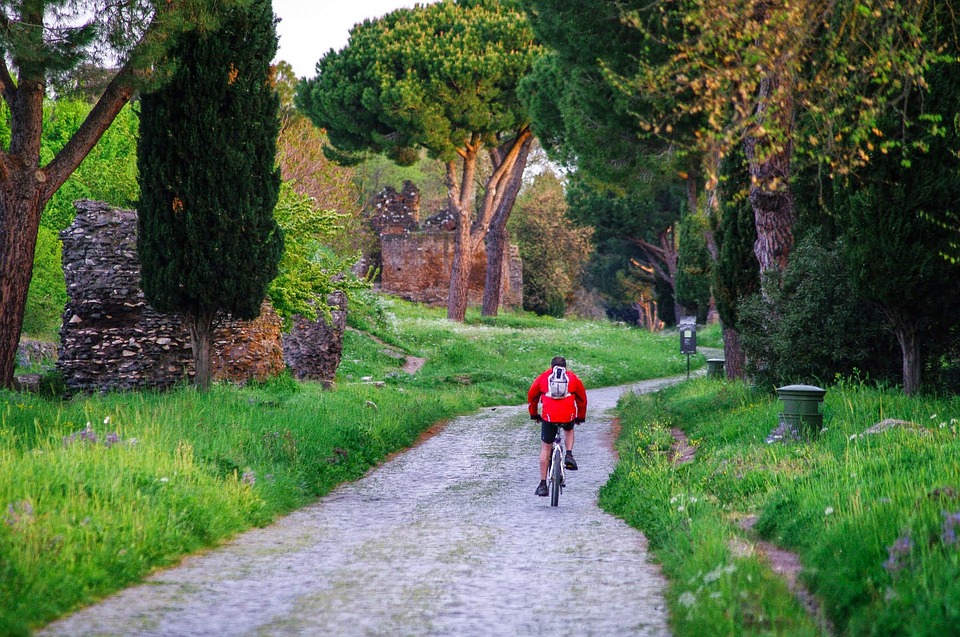 The ‘queen’ of the Roman roads; Appia Antica is one of the city’s longest and oldest Roman roads. Named after consul Appius Claudius Caecus, who began construction on the road in 312 BCE; the road originally ran all the way from Rome to Brindisi, in the ‘heel of Italy’. The road was vital for the transportation of troops and goods to and from the capital. So great was it’s importance in fact, that it earned the nickname ‘regina viarium’; queen of the roads.

The Appian Way has a long and dark history, that you can discover by bike or on foot, as you soak in the beautiful Italian countryside that flanks the road. It was here that Spartacus and 6000 of his slave rebels were crucified in 71 BC. It was also here that Christian martyrs (not permitted to be buried within the city of Rome) were buried in 300km of underground catacombs. Three of the major catacombs, San Callisto, San Sebastiano and Santa Domitilla, are open for guided exploration. Other highlights on the road include the church ‘Domine Quo Vadis’. According to popular tradition, Jesus once met Peter here. The church even has a stone that claims to hold Jesus’ footprint.

You can rent a bike (or e bike) to enjoy long stretches of the road, or walk on the less cycle friendly sections of path. 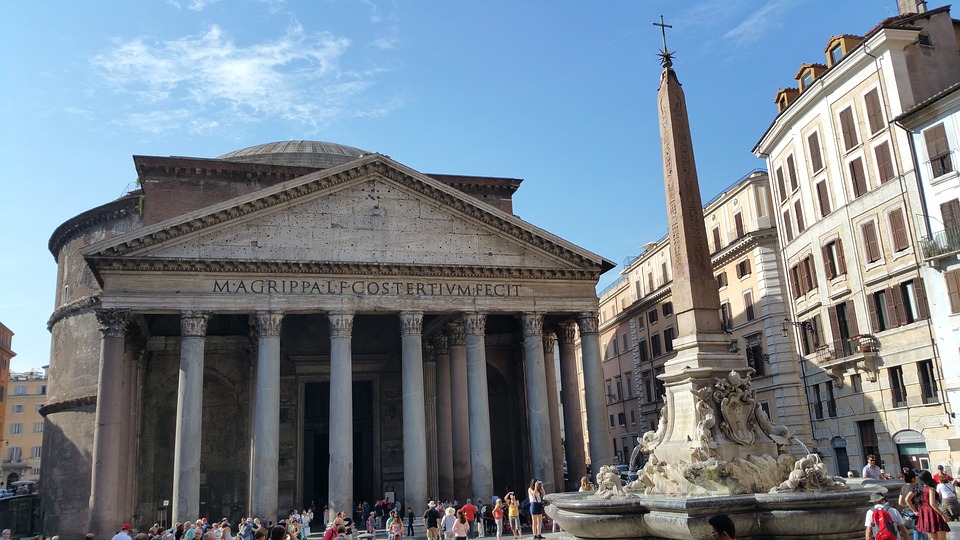 First commissioned by Marcus Agrippa, construction started on the Pantheon in 27 BCE. It is the best preserved building of ancient Rome to be found in the city centre, and one of the most recognisable structures of the ancient world. Agrippa’s building was damaged by a large fire in 80 CE and then again in 110 when it was struck by lightning. The current temple and characteristic round dome were then built in the 2nd century, under emperor Hadrian. The bronze text on the building’s facade reads, ‘M.AGRIPPA.L.F.COS.TERTIUM.FECIT’. It means, ‘Marcus Agrippa, son of Lucius, third-time consul, built this’. This text was also added to the building under Hadrian.

Although it remains unknown what the original purpose of the Pantheon was, the word Pantheon comes from the Greek and indicates a dedication to all gods. It was not until 608 that the building was used as a church, when emperor Phocas gave the building to pope Boniface IV.

The diameter of the dome at the Pantheon measures an incredible 44.4 metres and is the largest un-reinforced concrete dome in the world. The main focal point of the dome is the 8.7 meter ‘oculus’, which, as well as letting in light, was added to Hadrian’s original design to allow visitors to the temple be in direct contact with the heavens. Interestingly, the oculus is exactly 44.4 metres above the floor of the Pantheon.

Entry to the Pantheon is free with an audio guide available for an additional 6€. No entry available during mass (Sundays at 10:30 am and on Saturday at 5 pm). Many of Rome’s churches operate a dress code for entry. Be sure to cover knees and shoulders for your visit. 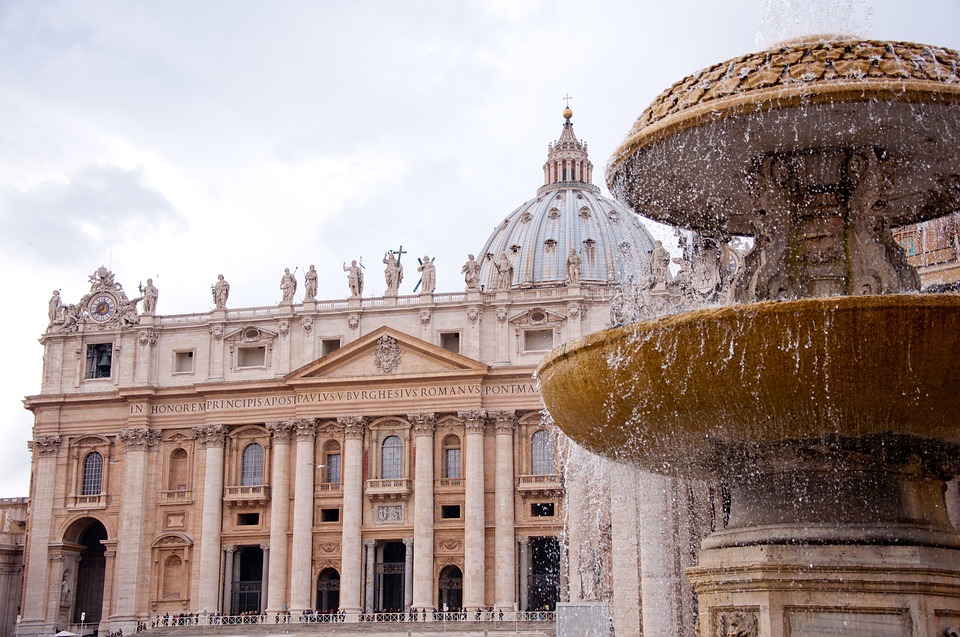 St. Peter’s Basilica was built between 1506 and 1626. Positioned on the site of a church dating back to 319 CE, that was said to be the site of Saint Peter’s burial. The Basilica is the world’s most renowned example of Renaissance architecture, and also stands as the largest church in the world. Construction of the Basilica took so long that several designers worked on the project. Among them were Bramante, Raphael, Antonio del Sangallo, Michelangelo, and Carlo Maderno. In 2007, a red chalk draft design, almost certainly by Michelangelo was discovered in the Vatican archives. The drawing, thought to be one of the artist’s last, was an especially rare find, as Michelangelo is known to have destroyed many of his deigns, prior to his death.

The basilica stands at the head of St. Peter’s Square, the iconic piazza, in the heart of the Vatican enclave. Other nearby sites include the Vatican Museums and the world renowned Sistine Chapel, which features the incredible frescoes, painted by Michelangelo.

For a unique way to view the basilica, and avoid much of the crowds, visit Via Niccolò Piccolomini. The view of the great dome, from here, is incredible. The street is perfectly aligned with the dome of St. Peters. As a result, it is also the site of an incredible optical illusion. From the far end of the hill top road the dome looks huge and imposing, but the closer you get the smaller it appears. The illusion is best appreciated from a vehicle, and is a great way to end a day in the city. Perhaps this could be your perfect way to relax after you Run Rome the Marathon!

Think we’ve missed something? Let us know your highlights of Rome in the comments below.

The ACEA Run Rome the Marathon 2021 is now ON SALE

The Rome Marathon is itself a great sightseeing tour of the incredible city. You will pass major sights such as The Vatican and the Colosseum. Running a marathon is an active and unique way to experience the city, while also getting to avoid the queues at all the major attractions. You will feel like you are part of the history, of this incredible city, as you run. The atmosphere is unbeatable, and is sure to lift your spirits and performance to the next level.

Book with confidence when you book with Sports Travel International 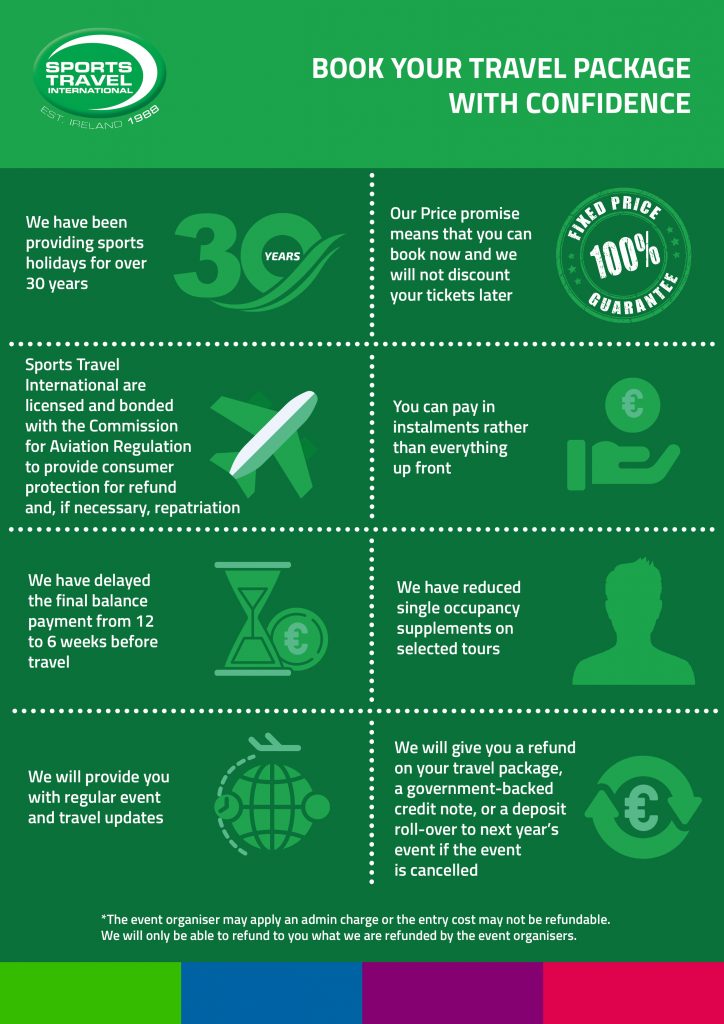 The team who pull your amazing trips together, up first it's Fidelma. A proud Dubliner with a fantastic connection with our customers and a personality that keeps us smiling. Have a read of blog to find out more about Fidelma or as we know her Fids. sportstravelinternational.com…

Want a feel good story? Check this out ⬇️ The greatest athlete of all time? He thinks so. Brilliant positivity in this article rte.ie/news/leinster/…

Whenever the day comes that we are back on the startline of a brilliant marathon, it sure will be a special day. If you could pick any start line in the world to go to right now, where would you go? #IrelandsSportsTravelExperts pic.twitter.com/3GNiYeQOPH

#FeelGoodFriday - Oh to feel as jolly as this bunch in Chicago. Great memories and our trips always make us feel positive because every runner has a unique story to tell. We hope to hear even more brilliant stories on our trips in the future #IrelandsSportsTravelExperts pic.twitter.com/SgMMI3yZh8