The idea is simple. Run the six recognised most important marathons in the world and you will receive a Six Star WMM Finisher’s Medal from the sponsors, Abbott Healthcare. That’s in addition to the individual medal you receive for completing each of the marathons in question.
To date, less than four thousand runners worldwide have achieved this feat and, as you would expect, that includes a number of Irish runners. In fact, demographically speaking, we are punching above our weight.

So here’s the rundown on each of these special marathons. The great news is that Sports Travel International can offer you a guaranteed entry to each and every one of them, as part of a tour package. 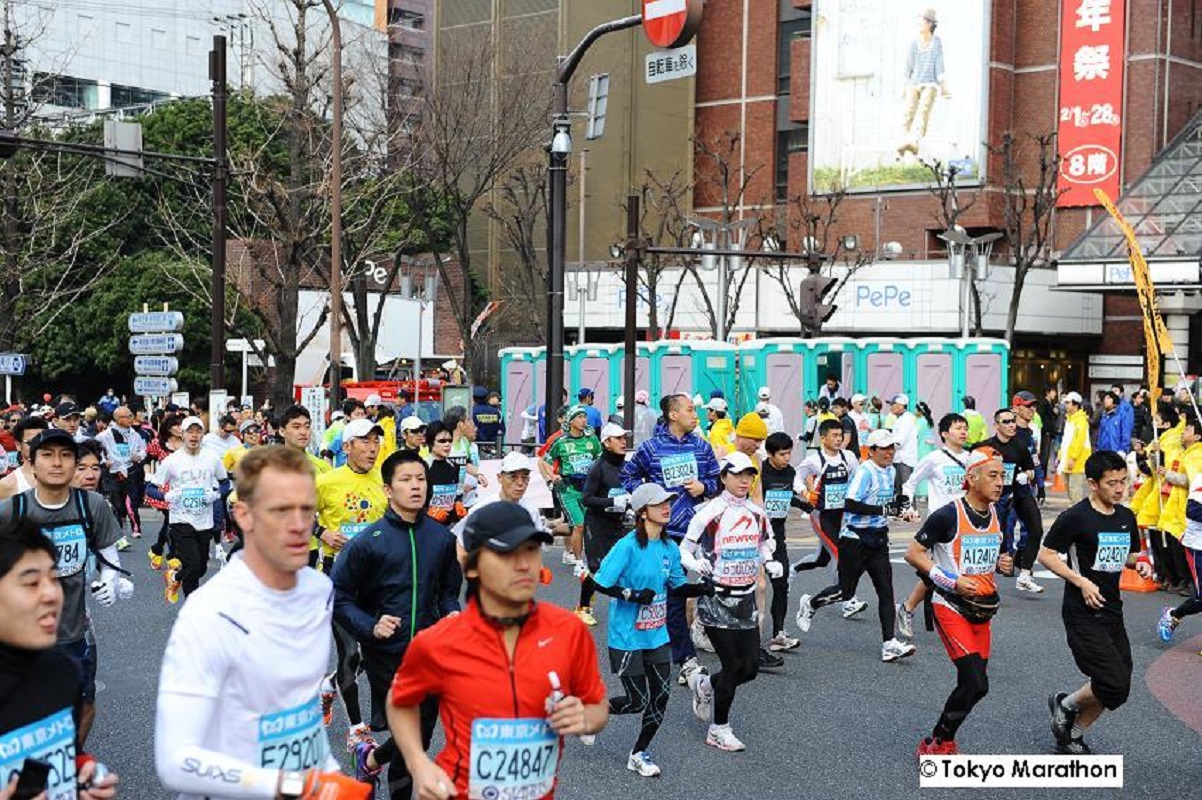 The first official Tokyo Marathon took place in February 2007 but before that running had a long and proud tradition in Japan. Since then, Tokyo has become one of the most popular marathons on the planet and Japan’s most iconic. With only 37,500 places it is one of the most difficult marathons to enter, with applications exceeding 330,000 every year. And that’s just in Japan.

Tokyo is a very different destination from the other Majors. There is much rich Japanese culture to explore in the capital – you will see some of it on our city tour, more on our Monday full day trip to Odawara, 100km from Tokyo (just half an hour on the bullet train). There you will enjoy some amazing experiences, including a dip in a traditional natural spa (onsen), perfect for soothing tired muscles the day after the marathon.
The day before the Tokyo Marathon runners, and supporters too, have the chance to participate in the Tokyo Friendship Run, a 4km fun run where fancy dress is encouraged and the Japanese let their hair down.

This run brings together runners from all corners of the globe in a spirit of friendship and goodwill and is one of the most popular events of the week.
The After Run Party on Sunday night is probably the best post-marathon party in the world, a mix of great food and drink, entertainment and a wonderful atmosphere. 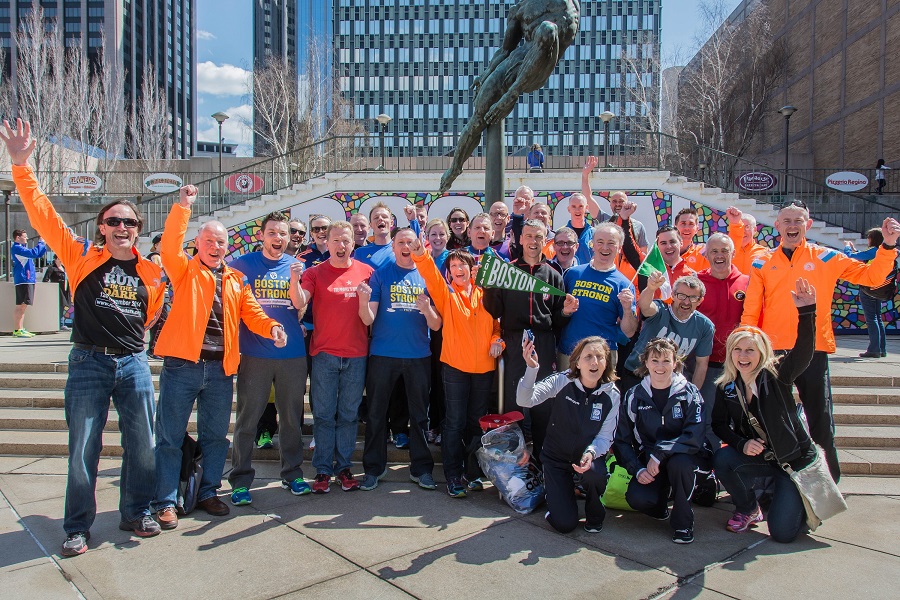 One of the most popular races in the world, the annual Boston Marathon is famously difficult to gain entry to and is on almost every marathon runner’s bucket list. It is the oldest marathon, dating back to 1897. Boston is also one of the friendliest cities in the USA, a walkable city which is the cradle of American civilisation and where the Irish are always welcome.

Each year the marathon starts on Patriots’ Day (a Monday) at Hopkinton village in the beautiful Massachusetts countryside, and finishes in downtown Boston. In 2019 the field will be limited to around 30,000 runners, less than the other five World Marathon Majors. Most of the runners gain entry by achieving tough qualifying times based on their age.

We have a limited allocation of guaranteed invitational entries so the marathon qualification times do not apply to our group. You just need to be able to complete the course in less than 6 hours or under 5 hours 20 minutes if you want to ensure your time is recorded and that you will receive a medal. The event is not suitable for walkers or first time marathon runners. Qualifiers are very welcome to join our group of course.

Our tour departs Dublin and Shannon on Friday, departing Boston the following Tuesday evening. As with all our tours, you can extend your stay if you wish, staying on at the hotel or travelling further afield. 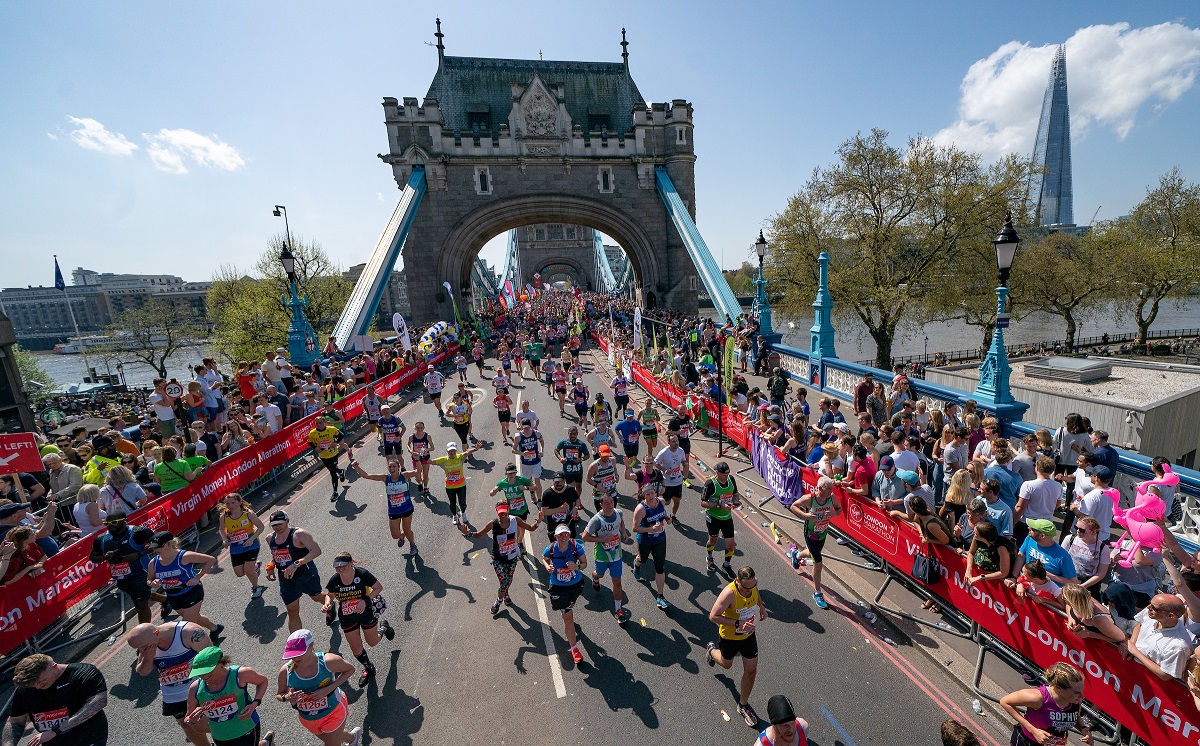 Since its inception in 1981 (a year after Dublin!), the London Marathon has been recognised as a leading event on the world sporting calendar. It has achieved legendary status for its mix of first-class elite fields with heart-warming examples of ordinary people running extraordinary marathons. And all in a world-class city backed by superb organisation and wildly enthusiastic supporters. Millions are raised for charity every year by runners in the London Marathon and it holds the Guinness world record as the largest annual fundraising event.

Starting from Blackheath near Greenwich, the course runs through many famous London districts and past many landmarks, including the Tower of London, the Houses of Parliament, Big Ben and Buckingham Palace. It finishes at the Mall in the heart of the city.

The course is mostly flat and is largely unchanged since 1981. The Finish Line is open for at least 8 hours and the minimum age is 18 years.
Our tour offers a choice of options, including flights to London from Dublin, Belfast, Cork and Shannon. We also provide the comfort of a private coach on race day from our hotel in central London to the start in Blackheath. You make your own way back! In fact, the finish line is not that far away. 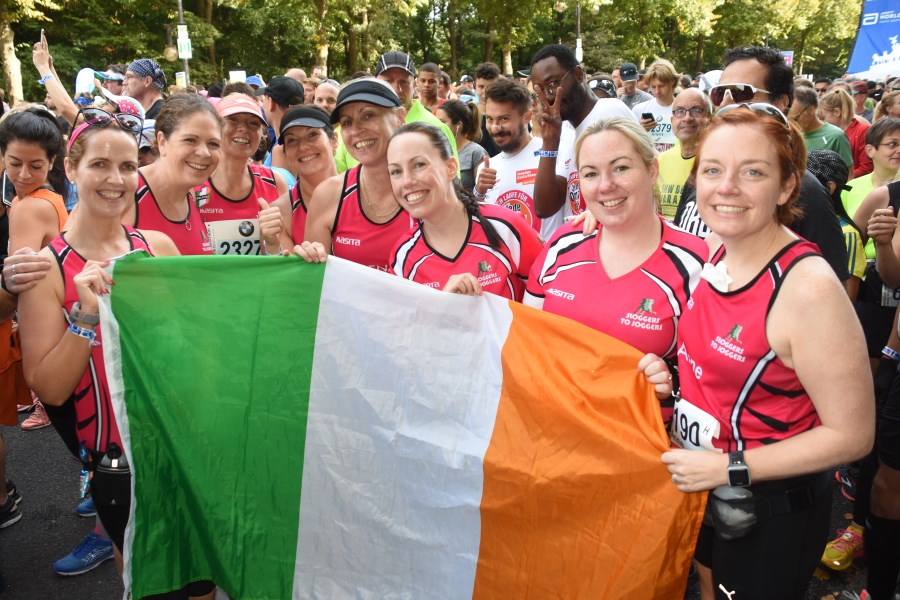 The Berlin Marathon has been held annually, usually on the last weekend of September, since 1974. It starts and finishes close to the famous Brandenburg Gate. Before the unification of East and West Germany in 1990, runners were restricted as to where they could actually run. But once the country was finally reunited, runners could at last run through both halves of the formerly divided city.

The course is flat, traffic-free and fast. The world record has been broken four times in Berlin in the past six years, making it the perfect marathon to run your PB. The finish line closes after 6 hours 15 minutes.

The Breakfast Run (6K) on Saturday morning is also one of the best anywhere. The run finishes in the historic 96,000-seater Olympic Stadium, scene of the 1936 Olympics and where the World Cup Final took place in 2006. This is a must-do event too.

We offer guaranteed entry and three nights in a top central hotel, from where you can explore Berlin’s many attractions. 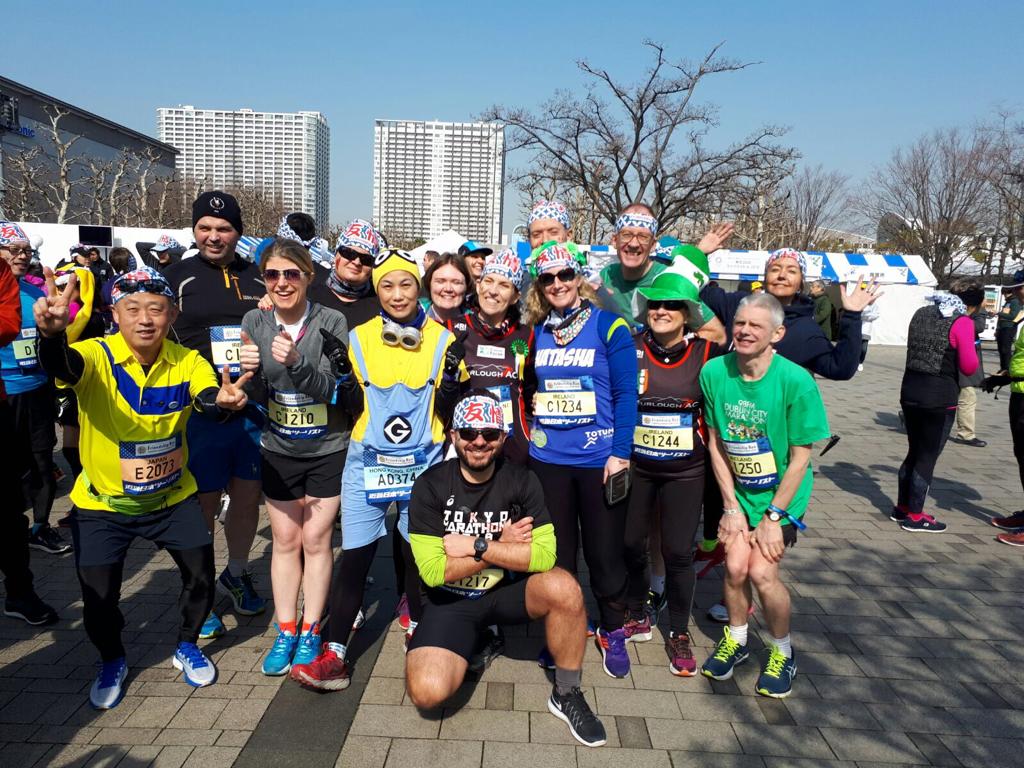 Known as the second city (because it burnt down in 1871), Chicago is famous for its stunning architecture and beautiful Lake Michigan – and as home to the Blues.

The Bank of America Chicago Marathon is one of the best in the world and the city itself is full of life – one of America’s greatest. Up to 45,000 runners take part in the marathon and there is huge crowd support around the course. Live bands add to the atmosphere.
The flat, loop course is also one of the fastest in the world and there are no qualifying restrictions. The average temperature at the start is a cool 7oC, rising to a pleasant 13oC at the finish.

The start/finish is in lovely Grant Park in the city centre and the course passes through 29 of Chicago’s historic and ethnic neighbourhoods. The finish line closes after 6 hours 30 minutes. Minimum age of participants is 16 years.

We offer four nights with entry in an excellent downtown 4* hotel, close to the race start and finish. There is also an excellent warm-up 5K run on Saturday. We show you how to get the best out of Chicago – a river cruise, shopping on the Magnificent Mile and a Blues show on our last night. What’s not to enjoy? 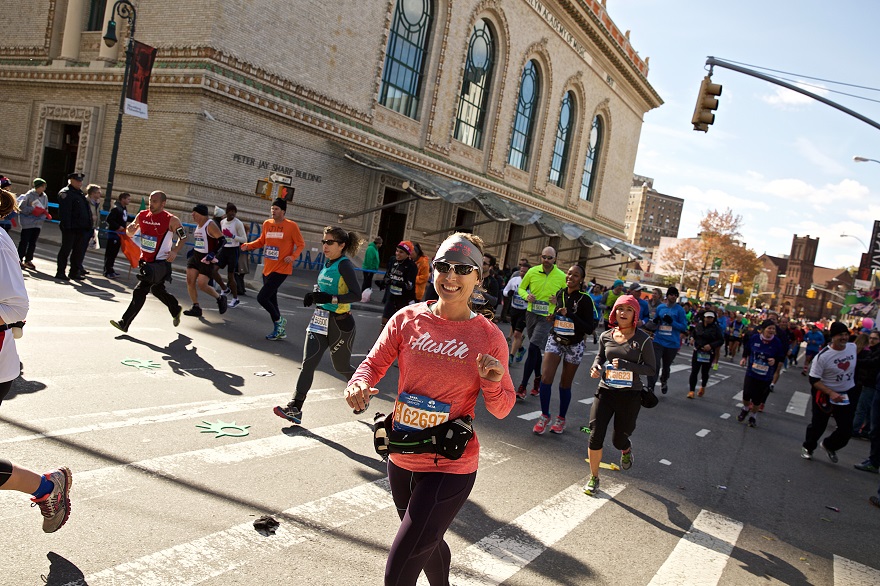 New York the City needs no introduction and neither does its marathon. It is the biggest (over 50,000 participants) and for many the best marathon in the world. The buzz is unbelievable.

The Marathon starts on Staten Island and runs through all 5 city boroughs (Staten Island, Brooklyn, Queens, the Bronx and Manhattan). It finishes in iconic Central Park, beautiful in its autumnal glory.

Walkers as well as runners are welcome to participate as the Finish Line is open for at least 8 hours. As on all our tours, we welcome non-running partners, family and friends – a great time is guaranteed! The TCS New York City Marathon is one of the world’s greatest participatory events and it is also a wonderful spectacle for supporters..

The Abbott Dash to the Finish Line takes place the day before the main event – a 5K fun run from the United Nations, down 42nd St, through Times Square, to its conclusion at the Marathon Finish Line in Central Park. Fun!

We offer a wide choice of flight options and your stay at a beautiful 4* hotel just a ten-minute walk from Times Square.

When you're ready for your next adventure we'll be here to help you. #lookingtothefuture @CyclingIreland twitter.com/CyclingIreland…

So run your mile and post in our strava club strava.com/clubs/sportstr…, we'll give you kudos for celebrating #GlobalRunningDay and for helping inspire people to run. Then tag your person in this post. #Run1Tag1

We want to see how you're celebrating #GlobalRunningDay Why not join in on the #Run1Tag1 social media challenge! Running 1 mile for someone that inspires you and tag a friend to do the same. #GlobalRunningDay

We are joining the world of Zoom, if you would like to arrange a zoom call with a member of our team to help you with anything from an upcoming trip or help you with a future booking or any other questions you may have, you can do so via the link below sportstravelinternational.com…

We’re reflecting on the amazing experiences we’ve had with some amazing people. We can’t wait to be doing this again and help runners take on the world’s best races. Whatever your next race and whenever you’re ready for another adventure. We’ll be here #lookingtothefuture pic.twitter.com/JUlKr6vxu6

About 6 days ago from Sportstravelint's Twitter via Hootsuite Inc.