The Mallorca 312 is one of the most renowned and prestigious sporting events in Europe. It is classed as one of the most difficult endurance events in the sportive calendar. Participants can choose from one of 3 distances: 312km, 225km and 167km. The most popular distance being the 312-kilometre course. The course comprises of a loop of the Serra Tramuntana mountains and takes the cyclists out to the Northeast part of the island. The Mallorca 312 is known for being one of the hardest amateur cycling events in the world. Indeed, part of the course is an thrilling climb, over a distance of 5000m. The route takes cyclists along some of Mallorca’s most scenic routes including the Col de Femenia, Pig Major and the spectacular MA-10. Organisers have put road closures in place, ensuring that the entire Serra Tramuntana mountains are specifically reserved for the competitors since 2016. This has undoubtedly contributed to making it one of the world’s most spectacular cycling destinations.

This year was the eleventh time that the Mallorca 312 took place. Andy Yeoman, our Sports Tours representative at the 312, also participated in the event. He was pleased to be able to support our customers at the iconic 312 Mallorca Sportive and share his experience with us. Although Andy had already cycled around Mallorca on several occasions, this was his first time competing in the event. It was great to have Andy there as he was able to meet up with our clients during the morning workshops and answer any last-minute queries they had. He even organised a pre-event ride in order for all of those involved to be able to check out their equipment. 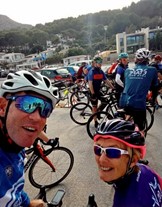 On the 24th of October, 4500 cyclists were eagerly waiting at the start line at 6:30am. The race was captained by a woman for the first time. Indeed, Mavi García was given the honour of wearing 312 for the event. On race day, Andy highlighted the fact that he had to find exactly where the start line was and tried to get the customers to join him at the front of the pen. He did this in order to ensure that they were near the front and to avoid being hampered by stragglers in the field. Even though the sun was yet to rise this didn’t dampen the cyclists’ sense of excitement and anticipation. 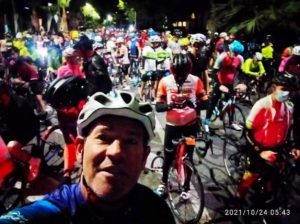 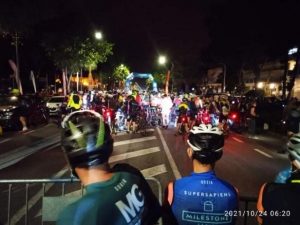 Day in the life and experience of the 312:

Andy spoke about the hotel’s fabulous location as it was just a few hundred meters from the start line. This was a fantastic vantage point for witnessing the mass and buzz of people making their way to the event. Even the 4:30am wakeup call didn’t affect the competitors’ spirits. Indeed, the atmosphere was electric atmosphere and the riders could sense this as soon as they left the hotel. The pen to the VIP section was next to them and as they were waiting. Andy said how surreal it was to see fire breathing Mallorquin devil figures entertaining the crowds.

When the race started at 6:30am, the cyclists left as part of a huge peloton. It was at this point that their adrenaline truly kicked in. Andy confirmed that “It was incredible to see the size of the crowds as we sped through the towns. Not only were there hundreds of marshals helping out on the route, all of the local residents were cheering us on, regardless of where you were in the field. It really made you feel as though you were part of an event that was as close to a UCI type event as you could get”.

Andy highlighted that for many, the support of friends and families went a long way in encouraging them to cross the finish line. When Andy race came to an end, his chip beeped and he was overcome with a fantastic sense of achievement. He loved seeing all of the riders with their medals and their beers, smiling from ear to ear: “I sat with them in the finishing tent regaling tales of the ride before heading back to the hotel for celebratory drinks with the clients.”

Interested in hearing about Andy’s top tips for the Mallorca 312? Make sure to read next week’s instalment.

If you’ve already completed a 5 or 10k race and are looking for a new challenge, then the Paris Half Marathon and Generali Berlin Half Marathon are great destinations🏃🏅! Get those running shoes laced up today 🇩🇪🇫🇷 #semideparis #generaliberlinhalf #running pic.twitter.com/5dArrJcsi3

🚨This is your final reminder🚨 The deadline window to book packages to the Berlin, London, Chicago and New York Marathons closes at midnight on Sunday, July 31st⭐🏅. Be quick! Book now👇 sportstravelinternational.com… #abbottwmm pic.twitter.com/PPSA2lQDUP

❗ACT NOW❗ There are only five days left for you to secure your place at a 2022 WMM. Are you ready to become a #BerlinLegend, run past some of England's most famous landmarks or tick The Big Apple off your bucket list✅? #berlinmarathon #tcslondonmarathon #tcsnewyorkmarathon pic.twitter.com/HkLtpwJclH

Introducing Sports Travel's fifth Top Trump Card – the TCS London Marathon 🏃⭐ ❗The countdown is on to Deadline Day...⏱️❗ You have just over a week left to secure your place on an Abbott WMM start line this year🇬🇧. #londonmarathon #abbottwmm #marathon pic.twitter.com/z5IYgBpI8B

⏰Deadline Day⏰ You have until midnight on July 31st to secure your entry to four of the world’s most prestigious and oversubscribed marathons with Sports Travel International. Our entry deadline is less than two weeks away, so you'll need to be quick!⏱️ #AbbottWMM #marathons pic.twitter.com/eg86Ao0QcB