Did you know that New York is such a big and diverse city that you could live there for four lifetimes and still not experience all of the amazing things it has to offer? Therefore, our mission is to provide you with our top 5 things to do whilst visiting New York.. and to cut down the long list of ways of spending your day.

New York City is one of the most visited cities in the world and is always high on the bucket list of many tourists across the world. Every year Sports Travel takes runners to ‘The Big Apple’ to compete in the United Airlines NYC Half and the TCS New York City Marathon. These two races allow you to run through New York City and experience the many sights and the fascinating atmosphere that is provided by millions of New Yorkers. Aside from running a fantastic half marathon or marathon there are hundreds of things to do in this brilliant city.

The Statue of Liberty is a colossal neoclassical sculpture on Liberty Island in New York Harbour. The statue was designed by French sculptor Frédéric Auguste Bartholdi and its metal framework was built by Gustave Eiffel. It was a gift of friendship from the people of France to the people of the United States and is a universal symbol of freedom and democracy. The figure of Libertas holds a torch above her head with her right hand, and in her left hand carries a tabula ansata inscribed JULY IV MDCCLXXVI (July 4, 1776 in Roman numerals), the date of the U.S. Declaration of Independence.

One of the best stereotypical tourist activities is taking a dinner cruise on the Bateaux. Not only is the food all local and five star, but it really is the best cruise of all the NYC Harbour cruises. It takes you to all the key sights, including the Brooklyn Bridge and will stop right in front of the Statue of Liberty for a long time so that people can take photos of the icon, and just soak in the ambiance of the city! We would recommend taking the Bateaux instead of going to the Statue of Liberty National Park. Your ticket includes dinner, but I highly recommend purchasing an alcohol package as well. They always have a live band which makes the experience more fun, and typically about halfway through the cruise, people are intoxicated enough that everyone is up and dancing. For more information click here.

Located at the intersection of Park Avenue and 42nd Street (89 E. 42nd Street), Grand Central Terminal is one of the most-visited destinations in New York City. Grand Central Terminal is more than just one of the busiest train stations in the world—it’s a window into old New York and into a time when train travel was the ultimate luxury for the wealthy and a necessity for the working man. The gorgeous, restored Beaux Arts building is an historic NYC landmark is not only a transportation hub—it’s a shopping, dining, and cultural destination with 60 shops, 35 places to eat, and a full calendar of events. All of Grand Central’s many activities are all under one magnificent roof, making it an easy visit; by foot, bus or metro. 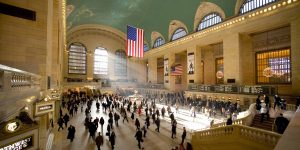 The city held a commemoration ceremony in lower Manhattan and a range of associated events throughout the city. The National September 11 Memorial & Museum is a memorial and museum commemorating the September 11, 2001 attacks, which killed 2,977 people, and the 1993 World Trade Centre bombing, which killed six. This year New York’s 9/11 Memorial & Museum marked its 20th anniversary of the terrorist attacks on the World Trade Centre. As you enter the museum, you descend from the street to the ground floor, the foundation of the former Twin Tower. The museum itself is a masterful balance: it’s grand in scale, contemplative in its construction, and personal in its execution. It pays homage to the enormity of the loss, both physical and emotional.

Fancy a break from the bustling, busy city? Why not take a visit to Central Park. It’s a great opportunity to get away from the crowds and enjoy a different view of the city. The park is spread across 842 acres of land. The outdoor space offers walking trails, outdoor films, guided tour and concerts allowing you to take in the culture through live performances. During your time at Central Park you will be able to discover more about the history of NYC. Indeed, along the way, you pass fountains, monuments, sculptures, bridges, and arches, plus 21 playgrounds, a winter ice-skating rink, a zoo, and even a castle. But you’d hardly notice the four major crosstown thoroughfares, which cleverly disappear into foliage-covered tunnels.

SoHo is famous for so many reasons. There are a bunch of attractions, restaurants and shops that it can be overwhelming especially if it’s your first time visiting. It’s a popular neighbourhood and is very busy throughout the whole year. So here’s a list of what we highly recommend: 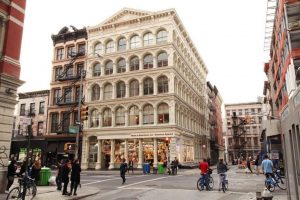 Finally, we couldn’t resist giving you our top places to run/work-out in New York..

The NYRR RunCenter, featuring the New Balance Run Hub, is the best place to start a run, to do many other runner-specific work-outs, and of course to purchase all of your NYRR branded running gear (which we know every runner wants to have!). It’s located on 57th Street, two blocks away from Central Park South. The RunCenter is known across the five boroughs of NYC for being the place to go for runners. They also feature free lockers for your belongings before going for a run, or attending one of the FREE fitness classes that they host. Some examples of the types of classes offered are:

To check out the available classes and offerings, you can go to their website here: https://www.nyrr.org/runcenter

We’re thrilled to announce that the TCS London Marathon 2022 is on sale NOW!🏃🇬🇧 As the official Irish tour operator, we can GUARANTEE your place in the ‘Marathon of a Lifetime’! ✅ Find out more and book now!👇 sportstravelinternational.com… #IrelandsSportTravelExperts #LondonMarathon pic.twitter.com/FynZmgroQQ

Injuries from running are extremely common, but none the less are extremely frustrating🏃👎 If you’re hoping to avoid those dreaded injuries in 2022 and stay on track with your running without setbacks, have a read of this great article!👇👟 rte.ie/brainstorm/202…

Coming soon...👀 Are you ready to take on the legendary TCS London Marathon in 2022?🏃🇬🇧 Make sure you sign up to our Waiting List to be the first to know when we're on sale!📣 Don't miss out and sign up below!👇 sportstravelinternational.com… #IrelandsSportTravelExperts #LondonMarathon pic.twitter.com/iPogg8nTIu

@AlmaMcclorey A very Happy New Year to you Alma!🎉We hope to see you again this year!😃